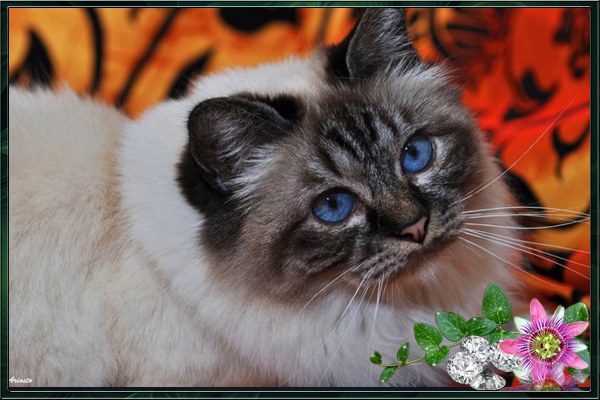 The first Birman cat has made ​​its entry into the house almost 13 years ago thanks to my dear friend and now sister in law Raffaella Sorropago. It was a long time that I went around looking for a nice pussy and among many breeders she was the only one giving mevalid explanations…thanks again for everything and for the great cooperation which continues… As of today I have 3 neuter  birmans…or perhaps they are the ones who own me.
At the moment my Birman program is stopped and all my intact cats are at Icingsugar and Fluffypants breeding programs.

The origin of the Birman is surrounded by an aura of mystery and legend, it is said that the breed is descended from an ancient population of white cats hosted by Lao Tsun. One day the temple was attacked by robbers who killed the old lama. As soon as the cat saw his beloved master lying on the ground, it jumped on the body of the master watching intently the goddess how to ask revenge. Then came a magical transformation: its clothes became golden as a statue of the goddess, eyes blue as sapphires,the face, ears and tail assumed the dark color of the earth and so was born the Birman.

The Birman cat is calm, with good-natured and docile temperament. It’s very pleasant to live with this cat, is friendly, intelligent and gets on well with its similar and dogs. It has a very loving nature, loves company and hates lonelyness. It is perfectly adapted to life in apartment and it is not noisy. 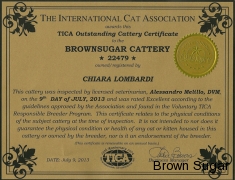